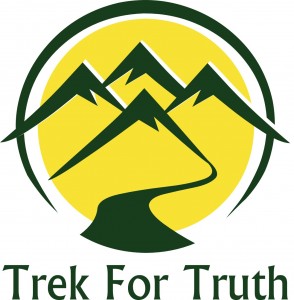 “We cannot solve our problems with the same level of thinking we used when we created them.”   — Albert Einstein

Q:  What is Trek For Truth?

A:  A walking conversation about the higher nature and potential of human beings and humanity as a whole.  Trek For Truth is a wandering dialogue across America, discussing our current circumstances and pondering the possibilities of who we are and who we can become.   It is about meeting people where they live, in person and through cyberspace, and exchanging ideas about our current state of being and our potential to be so much more.  It is about framing our challenges in light of greater knowledge, wisdom and truth and to expand our sense of the possible.  Peace Pilgrim, Nikola Tesla and Royal Raymond Rife were all inviting their fellow humans to imagine a world free of war, a world free of disease, a world free of want.  So why are their stories not more well known?  Human freedom is the unifying theme shared by those who follow the call of their hearts.  So Trek For Truth is kind of a cross between the stories of Johnny Appleseed and Paul Revere.  We hope to sew seeds of inspiration, as well as sound an alarm about the destructive nature of the deceit and manipulation intended to hold humanity down.

“For a seed to achieve its greatest expression, it must come completely undone. The shell cracks, its insides come out and everything changes. To someone who doesn’t understand growth, it would look like complete destruction.”  — Cynthia Occelli

On April 18th, 2015, Logan McCulloch is going to begin hiking west on the American Discovery Trail, beginning at the Atlantic Ocean in Delaware.  Along the way we’re going to meet the people of this land, ask questions about topics, people and information that may not be well known, and share videos and blog posts about about a variety of topics  We hope to learn about new information and ways of looking at our world from the people we meet.  We’re also going to be posing questions and offering observations that may trigger deeper thinking about some of the major challenges we face.  Here’s an example:

There are more people currently employed by the cancer industry in the US than those currently diagnosed with cancer.  Cancer industry…doesn’t that very phrase provoke cause for concern?  It is completely true that if inexpensive cures for cancer were released to the public this year, our economy would be wrecked.  Thousands upon thousands would be economically devastated.  We literally cannot afford to cure cancer.  Isn’t that a paradox we should be discussing?  We have an economy that depends upon enough people being sick to keep the wheels turning (and aren’t we led to believe that economies must grow (kinda like cancer)?  How can a reality such as that not be considered completely insane???  And the truth is, these cures do exist, and have for many decades (see the information about Royal Raymond Rife under “Health” on the Awareness page).  Each of us has helped create and maintain a system that encourages the active suppression of cures for devastating diseases, because disease is a growth industry (see my blog post on this topic here Disease – A Growth Industry)!  Is than not a little crazy?  This is one of those big picture, “how the world works” topics we’re going to tackle, and add our voice to the millions of people around the world who are waking up to the urgent need to get involved and elevate our thinking, our compassion and our consciousness.

“Fortunately, some are born with spiritual immune systems that sooner or later give rejection to the illusory worldview grafted upon them from birth through social conditioning. They begin sensing that something is amiss, and start looking for answers.

Inner knowledge and anomalous outer experiences show them a side of reality others are oblivious to, and so begins their journey of awakening.

Each step of the journey is made by following the heart instead of following the crowd and by choosing knowledge over the veils of ignorance.”   — Henri Bergson, On Intuition vs. Intellect, 1907

Accurately defining a problem depends upon truthful knowledge about its nature and origin.  The quality of the answers we deduce depends upon the quality of our questions, and acquiring honest information about the essence of the challenges we intend to rise above.  Truth can be elusive.  But the skills that can help a truth seeker include critical thinking, intuitive discernment and fearless communication.  Our ability to identify and face lies, deceit and self-interested manipulation can aid us in our quest for truth.  This pertains to our fearless examination of our inner and outer worlds.  The lies we sometimes tell ourselves, about ourselves, can be more debilitating than those we appear to encounter “out there.”

There is certainly a moral truth that simply says “do no harm” – and that includes harm to oneself, others and others’ property.  It is a simple truth, but takes great vigilance to follow in body, but even more so in mind.  Our thoughts are creative, and harm begins first in our minds.  It can then infect our hearts and spill over into the physical world.

Apocalypse:  (Greek:  apokálypsis; “lifting of the veil” or “revelation”) is a disclosure of something hidden from the majority of humankind in an era dominated by falsehood and misconception, i.e. the veil to be lifted.

“It’s easier to fool people than to convince them they have been fooled.”  — Mark Twain

Ego:  A separated, fear-based sense of self.  Sometimes referred to as “The Liar”; the nagging, inner voice of lack, limitation and unworthiness.  Hallmark traits include a sense of shame, guilt, vanity, jealously, superiority, inferiority, control, dominance, and other false-self hierarchies.

All con artists rely on the ego of those they con to maintain their criminal ways.  Facing facts that contradict those that may frame one’s sense of self can be painful.  Author George Orwell keeps coming to mind and his description of the concept of “double think”, which closely resembles the psychological state referred to as cognitive dissonance:

“Sometimes people hold a core belief that is very strong. When they are presented with evidence that works against that belief, the new evidence cannot be accepted. It would create a feeling that is extremely uncomfortable, called cognitive dissonance. And because it is so important to protect the core belief, they will rationalize, ignore and even deny anything that doesn’t fit in with the core belief.”  — Frantz Fanon

We each have been led to believe many things about ourselves, our world and our nature and power as human beings.  Literally from the moment we are born, others begin to lead us to believe.  As author don Miguel Ruiz writes in The Four Agreements, many of our teachers are those who love us dearly and who are only teaching what they themselves have been taught.

More often than not, these beliefs leave the individual feeling somewhat small and powerless.  Ever wonder why that is?  Do you think that is mere accident?  The phrase led to believe is a critical one for the truth seeker.  It begs the question: Who is leading and why and where are they leading us?

In the words of the popular movie The Matrix, answering these questions will entail taking “the red pill” and diving into topics such as:  hidden (and manipulated) history, social engineering, propaganda and mind control, state run education systems and corporate mass media.  Clear and critical thinking about agendas that divide and diminish large groups of people for the benefit of a few is essential for the truth seeker.  One question that has followed me since my youth is:  Why is there a ruling class (royalty, aristocracy, elites, priests, politicians, etc.) in every “civilization” throughout “civilized” history?  Why do we worship other human beings (“celebrities”, sports figures, business tycoons, etc.)?  Who led us to believe that some have rights and worth above others?

Yes, truth may be elusive.  But our ability to detect lies driven by self-interested agendas can be a powerful tool to lead us in the right direction.  One hallmark of a lie, a distortion of the truth, is information that is broadcast purely to engender fear.  A false problem that provokes a fear-based reaction followed by a well marketed solution that increases the power and control of an external “authority”, and decreases the power and freedom of the individual.  Who is the author of your life experience?  Only you have that answer.

“You never change things by fighting the existing reality.  To change something, build a new model that makes the existing model obsolete.”  — Buckminster Fuller

We hope you join us for this adventure.  Your own Trek For Truth is a daily journey.  Our intention is to offer support, information and resources for those seeking their own answers.  The folks supporting this project are themselves seekers of answers to big questions, trying to elevate their minds and their hearts above the level that helped create the problems we face.  We hope you find the information on this website helpful, and we invite you to join us for this adventure.  Here’s to the Truth of our higher nature!