As we update you on progress for the week ending May 2nd, I am excited to report that Logan will broach the 200 mile mark this coming week–and what a week it has been!    Let’s dive right into it…

The ADT path conditions were MUCH better this week because Logan was on the C&O canal tow path, versus the heavily congested, more dangerous highways of last week’s leg.  That said, Logan began the week with a deficit; a wicked raw foot from the first week ending, and a ‘little piggy’ that went ‘ouch’.  …And THEN, Monday began with a bit of a scare, whereas Logan discovered an embedded tick that hitched a ride at some point the night before: 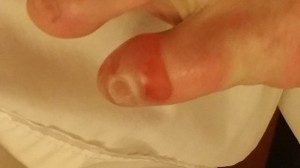 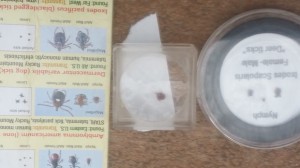 The Chesapeake and Ohio Canal was operated from 1831 until 1924 along the Potomac River, primarily for transporting coal from the Allegheny Mountains.  It runs from Washington, D.C., to Cumberland, MD.  To give you an idea of where this is, see map image here.  This illustrates mile 0-10 of the C&O, which Logan accomplished on Wednesday, April 29–and then some!  It was a 19 mile day that day.

–But wait– I am getting ahead of the chronology because we want to tell you about some of the really awesome folks that Logan met at Greenbelt Park the day before, one of whom was Phil, and another wasVinny from NY. 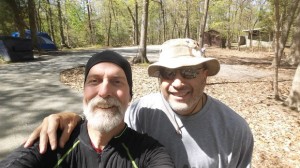 Vinny is Biking the ADT

Vinny is a fellow veteran who is biking the ADT, trying to raise funds for veterans services such as suicide prevention and the Warrior Hike Walking Off The War Program created by Marine veteran Sean Gobin. WAY TO GO VINNY– and thank you — for bringing awareness and assistance to the plight of the innumerable veterans who have been ABSOLUTELY SCREWED* and left hanging by our ‘Government’ (*Drew’s commentary)

Logan broke camp at 0630 Wednesday, April 29, and busted out 19 miles in order to meet his friend and trail angels, Oslem and her husbans, in time for their rendezvous point near the C&O.  Here’s a great pic of Logan at the time: 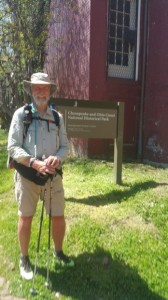 Thursday was a ‘zero day’, meaning that Logan did not log any Trek miles, because he was in Arlington, VA for the May Day event.  The ‘May Day’ is a national Lyme Disease protest at the HQ of the Infectious Diseases Society of America (IDSA).  An objective of the May Day event is to persuade the IDSA to reconsider their position denying the existence of chronic Lyme disease.

–OH, BTW, if you want to learn more about the horrendous deeds of the tax-payer-funded organizations that are SUPPOSED to be helping the HUNDREDS OF THOUSANDS of our citizens whom have contracted Lyme, but are, instead, kowtowing to the insidious big pharma monopoly, then go to this link on YouTube for a documentary that will BLOW YOUR MIND:

…And here is a GREAT photo of Oslem at the protest–thanks again, Oslem, to you and your husband, for taking care of Logan on the trail: 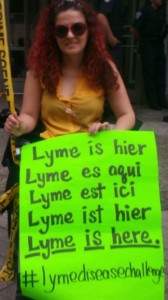 Logan made a couple of videos leading up to this; if you go to this upload you can find both:

As of Friday, May 1, Logan was on the C&O path, having departed the great folks he met at the May Day protest the two days before.

It was on this day that Logan met another AWESOME human being by the name of Warren.  …Logan and I spoke of this encounter on Saturday morning, when I called him for counsel because I was totally depressed.

I had been doing research the night before; I was delving into some data for upcoming posts to TFT (for which I am woefully behind posting content).  As these things go, one rabbit hole led to another, and I came across some research about the programmed sexual-ization of young children.  …It was a video that showed, very clearly, how the film industry, TV and other controlled interest of the ruling oligarchy manipulate children to become desensitized to child pornography and other mass-media mind control methods in order to induce society into accepting the abuse and exploitation of children–GLOBALLY!!!

As I watched it, I became overwhelmed with sadness, (if not wanting to vomit), at the fact that our society has become so very brainwashed…at the point that there is some perverse cognitive dissonance which impedes people from seeing the gross manipulation to which our children are exposed– and via such dynasties as Disney and all of the other plethora of lame-stream media propaganda infiltrating our homes.

I was very, very sad.  I felt that our Trek For Truth initiative could NEVER overcome nor remotely compete against the BILLIONS of dollars and decades of mind control  invested by ALL of the media who serve ONLY the interest of the sick bastards at the top of this fetid pyramid.  …Those same sick bastards who refer to YOU as ‘useless eaters’ (google it).

I became very depressed, indeed…I wondered if all of this effort was for naught.

The next morning (yesterday- Saturday), I texted Logan to check in, and he too was a bit worn down. –No doubt because his body ached, but also mentally.   We decided to chat, although Logan’s phone battery was  quite low, and we were mutually concerned about him having no phone power out there on the trail.

As I conveyed to him my concerns and described the absolute ‘low’ I was in, he told me about a gentlemen he had met the day before…a very kind person named Warren.

As Logan conveyed his experience:  Warren was jogging along the C&O path, passed by Logan, then circled back to strike up a conversation.  They discussed the TFT mission and Warren was impressed.  He spontaneously offered food and shelter to Logan that night, but Logan declined because he was only a couple miles from his bivouac site for that evening.  Kindly, they parted ways, each continuing on their routes for that day.   It was but a short while later that Logan felt tremendous remorse for declining the invitation from Warren.   “…I was smacking my forehead, Drew, doing a palm face-plant, that I might have offended Warren in some way, when he was only trying to help…I feel very badly for not taking him up on his offer, especially when the whole purpose of TFT is, in essence, a massive community outreach to engage with anyone and everyone along the trail… ”

As we spoke of this encounter with Warren, I became suddenly inspired!  “It is true, Logan“, I exclaimed.  “People ARE good by nature– they DO want change and they DO want to help!  –And to engender collaboration from folks such as Warren is  exactly why we sat about to launch the TFT to begin with!”

Although I had not met Warren, I had become immensely rejuvenated  by his offer of goodwill toward Logan and our TFT mission– I had become re-inspired and felt a sense of hope at a time when I needed it most.

Upon hearing Logan describe his encounter with Warren, I became evermore determined to step back from the brink of this sadness that I had felt hitherto; I became even MORE motivated to continue this trek because of, and for, the redemptive qualities of compassionate human spirit embodied by people such as Warren.  As such, I loaded up Cuz and drove to my happy, healing place in the heart of the Clark State Forest (Henryville, IN) on Saturday (yesterday) afternoon.  …It turned out to be a remarkable day!!!

We would like to convey a BIG sincere TFT ‘Thank You’ to Warren, Phil, Vinny, Oslem and EVERYONE along the path of life who demonstrate and exude the attitudes of mind and qualities of spirit that make for radiant living; that make life on this planet worthwhile.  We are in awe of your contribution to humanity, toward the betterment of healing and fostering the next higher ideal of what we can achieve and become as a loving, benevolent species.

In closing, I leave you with a couple photos from Cuz’s and my mini-TFT yesterday in Henryville. This is the place where I was raised to appreciate the divinity of nature; the divinity in each of us…I remain inspired, in-spirit, with SO MUCH LOVE in my heart and anticipation for the next chapter of the TFT trail journal.

Until next week, dear TFT community, may your trek in the days ahead lead you to meet such wonderful humans as we’ve encountered along the way thus far.

…and now, here is a pic of one happy dog on the scent of squirrels and dandelions 🙂 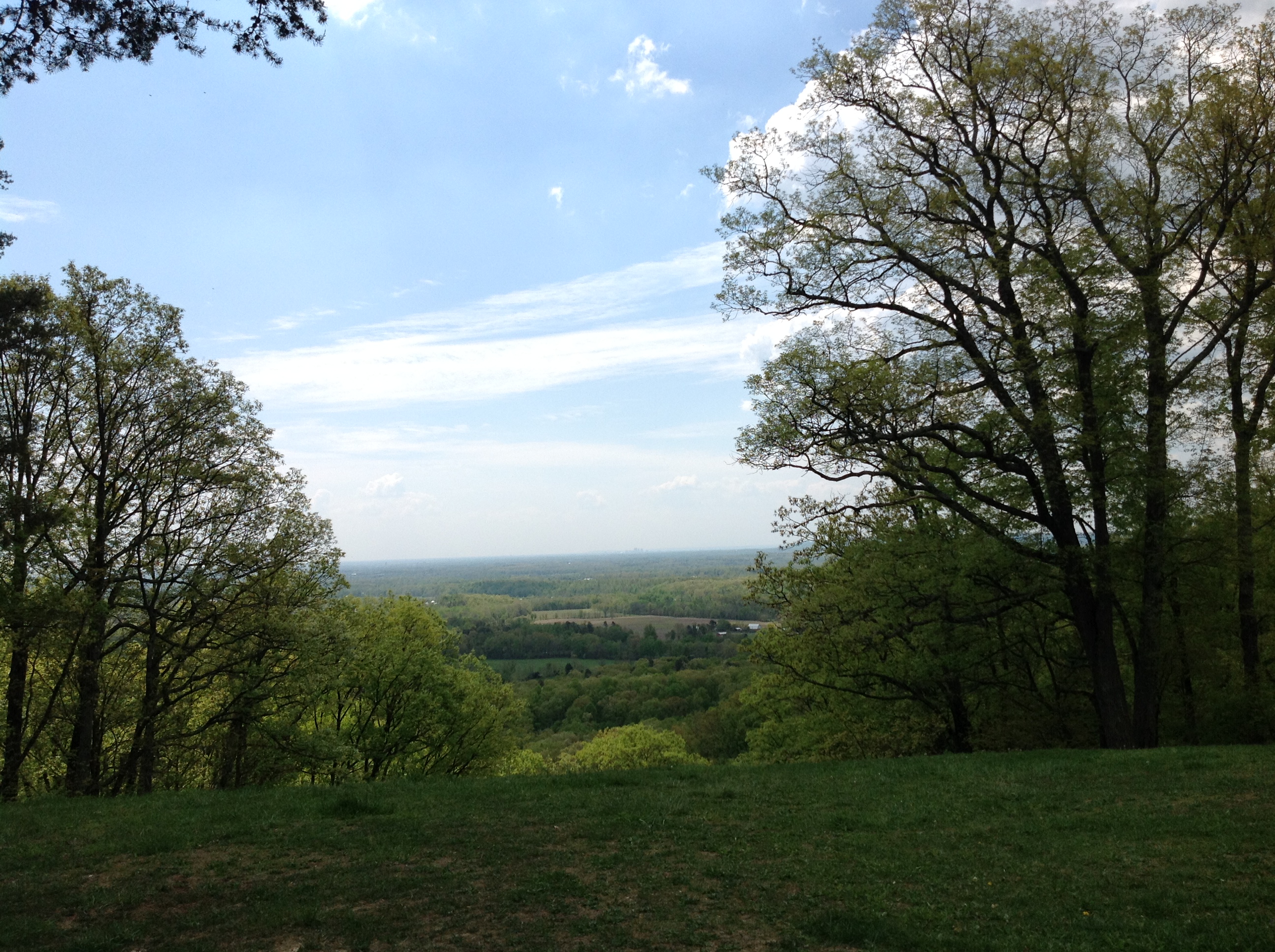 Peace be to you, TFT community!