Welcome to another exciting installment of ‘As the Trek Turns’.  For, indeed, we have turned a big corner to embark on PHASE 2 of the TFT odyssey.

Having taken the past couple of weeks to re-group, recuperate, re-tool and re-commit, we are now officially re-launched into the remaining 2800 miles of our quest for truth, happiness and the imminent liberation of humanity…

…And- oh- what a most wonderful time it is to be in love with life as we collectively manifest the blossoming next renaissance!

Let us begin this update by resuming from where we left off, July 12.  Per last report, Logan was taking a much-needed break after walking 1100 miles from Lewes, DE to Louisville, KY.  Concurrently, I was having Peter Pan-like lucid dreams about a rampant consumption society incited by the global manufacturing oligarchy of all things plastic.

…Both of us were having a twinge of angst about where and how we go from here.  This was especially with consideration for the mode of travel, in order to traverse The Rocky’s ahead of autumn.    To be perfectly honest, we were both a bit fatigued, if not once again feeling overwhelmed at the massive journey ahead, with utmost consideration for Logan, who’s butt is on the line each day he forges into uncharted territory.

We were re-minded of a passage oft contributed to Goethe:

“Until one is committed, there is hesitancy, the chance to draw back– Concerning all acts of initiative (and creation), there is one elementary truth that ignorance of which kills countless ideas and splendid plans: that the moment one definitely commits oneself, then Providence moves too.

All sorts of things occur to help one that would never otherwise have occurred. A whole stream of events issues from the decision, raising in one’s favor all manner of unforeseen incidents and meetings and material assistance, which no man could have dreamed would have come his way. Whatever you can do, or dream you can do, begin it. Boldness has genius, power, and magic in it. Begin it now.”

We prayed, consulted our Soul Group, and we figured it out, as inevitably we do:  Transition from two feet to two wheels– get a bike.  And so we did.

I don’t think either us has felt that boyhood sense of anticipation and glee for many years.  The one that comes with designing, sourcing and procuring a shiny new red bike, replete with disc brakes, paniers and front carriage!  Plus, it has that new bike smell (bonus).  🙂

Having determined and secured the going-forward mode of transportation, Logan performed due diligence for the route maps and launch window.  Based upon how many miles he can cycle per day, with about 2800 route miles from Louisville to termination in San Francisco, he estimates touching the Pacific Ocean in October.  Thusly, the phase 2 launch date was slated for Friday, July 31.  And so it was, and it was AWESOME!

We had many supporters turn out from the Lyme and TFT awareness community, as well as media coverage from WLKY-32.    Here is the link to the news story on WLKY; we commend the conscious, responsible journalism of Erica Coghill and WLKY TV:   http://www.wlky.com/news/man-to-bike-across-county-to-help-educate-people-about-lyme-disease/34470090

Subsequently, I made this quick highlights video to encapsulate Logan’s sendoff; his return to the path less taken:

Speaking of the path less taken and truth journalism, have you heard about the latest CDC bombshell?   Yeah.  The MAJOR news story –centered on the charges that have been read into the congressional record by Representative Bill Posey – but which have yet to be reported by the lamestream media???

Well, then, check out THIS article and ask yourself where in the heck your ‘(s)elected’ representatives stand on the matter and/or what have they done to address it: http://www.naturalnews.com/050599_CDC_scientists_scientific_fraud_vaccines_and_autism.html

Again:  things that make one go, “Hmmmmmm…maybe big pharma, in collusion with big government, IS actually out to exterminate us ‘useless eaters’ “.

…Yeah…and after you research ‘useless eaters’ for yourself, I’ll be happy to illuminate you about my time spent with Henry Kissinger and other genocidal heads of state.  Just remember, there is no ‘theory’ to the conspiracy, so please don’t waste my time with conjecture about the sad truth– and never ask me anything unless you want the unadulterated truth.   …Integrity comes with a price; a heavy burden at times, but it also delivers one to ultimate liberation and freedom.  I feel a quiet pity for anyone who knowingly chooses to avoid the truth, when they know full well what it is, but do not have the means or courage to face it.  I, personally, would die if I lived in such a contracted and compromised state of spirit, for it is not my nature.

But I digress, so allow me to continue on with the pertinent topics at hand.

The latest CDC revelations and continued denial by the AMA that chronic Lyme disease even exists smells like corruption (*cough* murder) to me.  You can make your own decision, or not.  Either way, a decision is being made, by someone, about YOUR lives.

After all, it’s always and ultimately up to each of us, isn’t it?   Whether to layover like a lapdog or, conversely, to stand up and ask the prudent questions, such as: WHAT IN THE BLOOMIN’ HELL IS GOING ON AROUND HERE, AND WHY IN THE HELL AREN’T THESE CRIMES AGAINST HUMANITY BEING REPORTED BY THE LAMESTREAM MEDIA!!!???

Ooh, ooh—look over there, look over there– Donald Trump’s toupee flew off, Bruce Jenner got a new bikini, and Madonna is showing her ass in public again  —squirrel!

(that was jaded sarcasm)

The reason for broaching the topic of fraud and deception surrounding the link between vaccines and autism has DIRECTLY to do with the same vein of continuing chicanery (by your ‘govern-ment’) regarding the refutation of Lyme disease as the epidemic that is it has become.

Did you know that our state government, most physicians and the medical institution at large do not even recognize/admit that Lyme can be contracted in the state of Kentucky???!!!  …Well, let’s just ask Michelle and her two sons (featured in the aforementioned WLKY news report).   Yeah.  They almost died from Lyme disease, after contracting it right here in My Old Kentucky Home state of denial.

This is an opportune point to insert a link to the absolutely incredible documentary film Under Our Skin.   For those who have not yet seen this, I cannot encourage you enough to check it out:  http://www.hulu.com/watch/268761

Are you seeing a pattern here, folks?

As John Cougar sings: ‘you have to stand for something, or you’re gonna fall for anything’.  Yup.  Words of wisdom and admonition.

For the wise owls cognizant to observe these patterns of murderous deception—as perpetrated by the CDC, AMA, the WHO, and every other derivative of the cabalist powers that were— let us stand with love in our hearts and CALL THEM OUT!

Speaking of wise owls who hoot out the truth, we send a big TFT salute with much gratitude to truth speakers such as:

Laura Walker at The Oracle Report and her promotion of the TFT with recent news links: (http://www.oraclereport.com/ )

And, most certainly, Erica Coghill at WLKY news for demonstrating the courage and integrity to report the real news you can use.  BTW, here’s a link to another story that Erica covered with Logan last year in June, 2014:    http://www.wlky.com/news/everyone-advised-to-protect-selves-against-ticks-diseases-caused-by-them/26441354

I spoke with Logan yesterday and today; he’s making great progress and his spirits are high. 🙂

After peddling across the foot bridge into Indiana ~ 11:00 am EST Friday, he arrived in Corydon, IN by 2:30pm and logged 50 miles on day 1 of the re-launch (woo-hoo!).  While in Corydon (Indiana’s first state capitol), he was thrilled to meet trail angel Jessica, who is also a Lyme patient.  We send a big TFT thanks and virtual hug to Jessica, who sent Logan a care package during his arduous hike through the Ohio leg of the trip, a month ago. 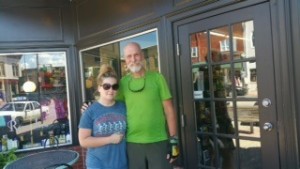 He logged another 50 miles on Saturday (yesterday), and is presently on track to touch Illinois late Monday or early Tuesday.  After that, ‘only’ 2500 miles and three months to go before we say helloooooo, San Francisco!    🙂

Yep, happy campers, we are back on the trail with a renewed wind in our sails.  Forever onward and upward we trek for truth and seek to unveil all evidence of the new renaissance—for it IS here NOW.

So arise and feel invigorated in the knowing that brighter days dawn as the old constructs of  a perverted power-elite crumbles back into the ether from which it came…like so much fog of a bad dream.  The separated mind is rejoined and rejoices to learn that in every way and always, truth and love prevails.  Let us then, campers, choose to be in love with each other, our natural state of being humankind.

Mark Twain is quoted as saying:  ‘The two most important days in your life are the day you are born and the day you find out why.‘

I, for one, was born to deliver a message of inspiration …to be given the opportunity to provide an example for what it is to embody the antithesis of and antidote to evil, for which the anagram is LIVE.

Let us all choose a happy and healthy life for ourselves and our mother earth.  As we forgive ourselves and the aberration of anything else that might appear to be in conflict with our divine nature, let us go forth on this trek in love with life eternal.

Until next progress report, may peace our goodwill and love be with you,