Happy SUNday, Trekkers for Truth, and welcome to TFT update #8.   I like the number 8; it is the number of infinity.  It’s so much fun being infinite.  One never runs out of things to exBErience  😉

That word just came to me.  I typed ‘be’ and was thinking ‘experience’, hence ‘exberience’.   In addition to my affinity for infinity, I also like fun with words .  In fact, I LOVE words!   Hey- just add the letter ‘L’ and you have worlds of words.  See what I mean?  -Fun!  🙂

Were I not focusing my efforts on being a human rights and happiness advocate, I’d likely be a full-time etymologist with a minor in hermeneutics.  It’s true: I can spend blissful hours perusing the dictionary or thesaurus.  We’ll chat more about words later.  For now, let us move on to the combined report for the period covering June 15-28.

What a past couple of weeks it has been!  More surreal than usual.  But ya know, that’s what makes the ‘exberience’ ever more amusing! 🙂

It so happened to be ‘Truth Tuesday’, and the ever-awesome Luba Williams made a really wonderful poster that Logan posted to his trail journal page.  Check it out–and THANK YOU, Luba! 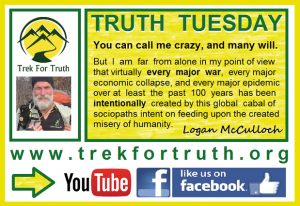 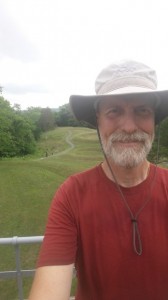 As of June 16, Logan was in West Union, OH, at the cumulative benchmark of 890 miles.   Since he was only a couple hours drive from Louisville, we pulled him off of the trail so that he could co-host the guest speaker event we had arranged with Adam Kokesh on Wednesday, June 17.

Thanks to Logan’s son, Gabe, for making the trip and helping us get him back here for the event.  Thanks also to Jim, Oliver and Jack for helping with AV and set-up; it was a team effort!

We also express much gratitude to everyone who came out in support of Adam’s visit.  Indeed, it was great crowd; there was copious laughter, hugs and smiles throughout the evening. 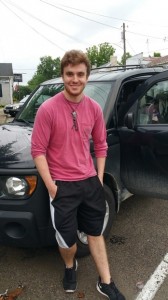 Adam and Macey are wonderful people.  We admire their tenacity and courage as they make their own trek across America on Adam’s Freedom Campfire Tour.

I gained something profoundly important while listening to Adam talk.  It gave me a perspective that lifted my spirits and attitude, with both a renewed sense of empowerment  and joyfulness.   It relates to one of my favorite passages in his book, FREEDOM: “Happiness Causes Freedom”.

Listening to Adam recount his experiences of incarceration, among other things, I was re-minded that freedom begins with one’s state of mind.  …Actually- with their state of heart.  As he writes: “If we don’t know how to be happy, what’s the point of being free?” 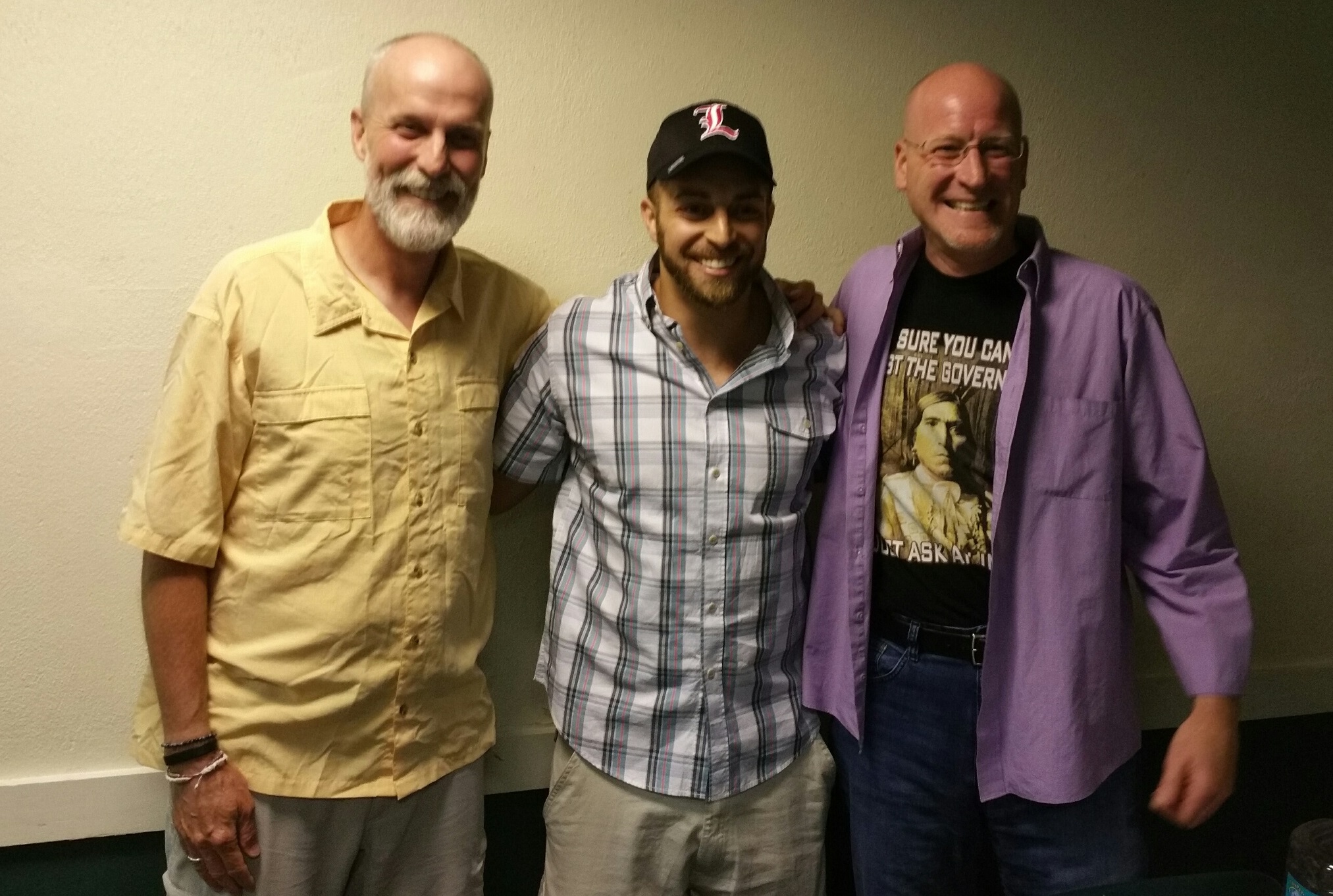 The joy and mission of TFT is helping others be liberated.  In our mission we are sometimes challenged with assimilating and transmuting dense energies; entities which are rather malevolent. In my experience as a human rights and happiness advocate, it is commonplace to encounter the absolute antithesis of happiness.  It takes much discipline to remain vigilant to ‘the game’, so as not to become seduced into the battle-mind of lower ego densities where they thrive.

When I originally drafted this post, the subject line was “1000 miles and still laughing”.   “Great” rhymes with “8”, so I opted for the rhyme this time.     The point is, both Logan and I sometimes struggle with the aforementioned transmutation; we become worn down and feel that our efforts are futile.  That’s usually when the ‘mind chatter’ sets in, along with unhappy feelings and/or bombardment of extremely negative thoughts.  …Heavy physical fatigue typically onsets as well.

When it gets bad enough, we will hop on a call to compare notes about what we are experiencing. These calls always come about in a synchronous way.  Inevitably, these discussions lead to mutual enLIGHTen-ment, whereupon we end up (literally) belly laughing out loud at a given situation.  As soon as we find the laughter, a redeeming aspect becomes apparent and we are re-calibrated back ‘up’ to the higher octaves.  Even though the topics with which we deal are tragic and often mind-blowing, you reach a point where tears turn to laughter because it’s just that darn ludicrous.  (…note to self:  ease back on the open source event correlation analysis for a few days…hahahahaha)

Maybe that’s why Kurt Vonnegut is my all-time favorite satirist.  He had a way of taking really dark topic matter (things such as war, trans-humanism, geoengineering etc.) and crafting a story that leads one to observe the lunacy, but in a nonthreatening way.  He created awareness without ‘preaching’; he demonstrated how to be empowered by observing the utter folly in the foibles of man.  …He found the humor in the seeming chaos and made us laugh about it.  God Bless You, Mr. Vonnegut.

This post was originally drafted for release on June 21, the summer solstice, and six months after the historic TFT launch meeting that Logan and I held on December 21, 2014 (winter solstice).  I sometimes have ‘a thing’ about symmetry; I also observe the solstices with devoted eagerness.  For me, they are pivotal balancing points.   June 21 was also Father’s day, and I was feeling introspective, if not a bit melancholy.  I pondered the legacy I’d leave my children, were I no longer here.  I awoke that day thinking about the ways I wish I was a better father, and a better person overall.

I tried to write, to be at the laptop, but it was making me physically ill.  (I have increasingly less tolerance for electronic devices and EMFs).   As much as I felt a tremendous sense of obligation to complete the report; to celebrate the build up to Logan’s 1000 mile marker, alas, I simply struggled to execute.  At that juncture, (i.e., a moment of in-congruence and conflict) I did what I so often do:  I invoke The Holy Instant; I listened to Steve Judd’s latest report; I re-read the latest Oracle Report.  …Daily, weekly and monthly, I find inspiring answers and the most salient, accurate guidance in The Oracle Report.  Sure enough (as usual) my prompt was found in the Friday report of June 19 — get outside and be with nature.  BTW– Oraclereport.com archives found here: Oracle Report Archives 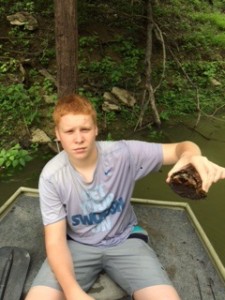 I called the marina at Taylorsville lake at 7:50 am and reserved a john boat.  Ollie and I spent the day on the water, exploring coves, swimming, playing with turtles and having a great time. 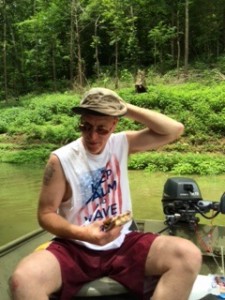 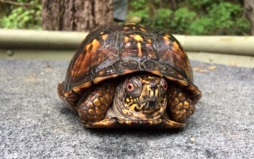 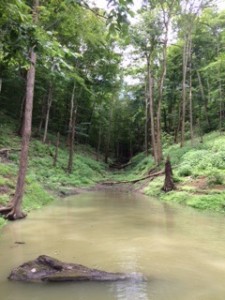 On the drive home that afternoon, out of the blue, Ollie-bear started asking me questions about the things Adam had spoken of.  “…why can’t you dance in Washington, D.C.; why do we pay so much taxes; why doesn’t the government like it when you all talk about certain things if they are true; when will I be old enough to drive across the country like Adam…”

I looked at him with a big grin, somewhat in amazement of his inquisitive mind and attentiveness.  At first I began to chuckle.  The chuckle became one of those kind that you cannot stop- like the giggles. The giggles snowballed into a roaring laugh- I had tears of laughter in my eyes as I was banging my hand on the steering wheel to catch my breath.  He kept asking me, “what’s so funny; why are you laughing?”

…Because, Oliver, you made me feel happy.  I was laughing with joy.  From the inquisitive minds of babes, life springs eternal.  To consider that my youngest son might some day become an anarchist, well, it just made me so proud…I had no further concerns about my legacy.

Nor am I concerned about our collective ability to complete this trek while bringing more joy to the world in the process.  We are humans being in the epoch of the second renaissance, and we know it. It’s why we are here.  As extensions of divinity- The All That Is- our expressions of love cannot be diminished.  We are exponentially creative spiritual beings having the experience of human form on this dimensional plane, for the purpose of anchoring heaven on earth.  –And it shall be done because we have already imagined that IT IS POSSIBLE!!!  As it is our essential nature to live an abundant joy-filled life- so be it – because we can!

Logan hiked almost 100 miles in the past 72 hours.  He arrived in corn patch Indiana, a little place called Chelsea, this afternoon at 4:00 pm.  It’s about 20 minutes from where I grew up (Austin, IN). Cuz and I loaded up and drove north to extract Logan from the trail; we took my mom to dinner before arriving back in The Ville a couple hours ago. 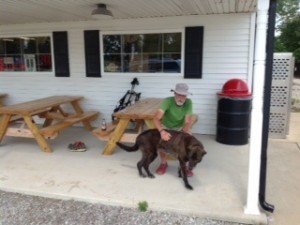 As we approached Logan’s sister’s home (Hi Les!), we spoke of remaining undeterred in our mission to alleviate pain, lack and suffering in all its forms, by continuing to hold the space for light and laughter…to forge ahead and find the humor in the folly of attacks against our species.

We meet again on July 5 to map the plan for the next 4000 miles of this odyssey, and at the same place we met on December 21 when the launch charter was finalized.  …Gosh.  I will never forget that day of the winter solstice 2014.  I was absolutely charged and frenetic about our prospects for success.  I was filled with eager anticipation for  the adventure to launch in the spring.  I didnt want that day to end.  I was entranced by the sun…it was so remarkable that day as I watched it set on the drive back home…

I am grateful that Logan will have a ‘zero’ week ahead.  He needs time to rest and recuperate, and we also can use this time to generate some media attention.

In closing, I leave you with something to ponder; with something to try the next time you feel sad, frustrated or overwhelmed and seek to pull yourself out of the doldrums:  Think of just one thing that makes you happy.  It might be a creative pursuit, an outdoor activity, a person, place or thing.  Whatever it is, just pause and think of it.  Then, upon feeling that happiness inside, ask yourself, “what is it that I like about this…what is it about this person/place/thing that makes me happy?”

When the answer comes to you, then ask the same question again about the answer, and so on and so forth…keep exploring what makes you happy, and see how your day unfolds from there.

In elevating our vibration to a state of joy, we become more prone to elevate the vibration of those around us.  The more this pool of joy – this circle of light- increases, so does it arise the vibration of our mother planet and all her species thereupon.  That’s a nice thought 🙂

Here is the photo I took of the sun on December 21, just before it sank below the horizon.  It made me happy to realize that as ‘my’ sun set, so was it also rising for someone else around the globe. 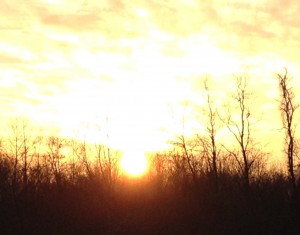 Until next time, happy campers, our peace and love be unto you,

P.S.– as always, we encourage you to pass this along to your family, friends and neighbors.  It’s not addictive and it’ll make you look cool.  🙂  Links below…

Also recall that Logan maintains a daily trail journal on Trail Journals.com, if you’d like to see additional commentary and/or photos of the day-to-day journey, then go to this link:  Unitic Daily Trail Journal